Only a few Atmegatrons left in stock!

It's been a crazy few months and we're now heading towards the end of the first batch. There's literally just a couple left! If you still haven't ordered your Atmegatron yet, head over to the shop.
A second batch of Atmegatrons will be made, but these won't be ready until later this year.
There are also some resellers that still have stock: Juno (UK), Analogue Haven (USA), Perfect Circuit Audio (USA) & Gizmo Music (Japan). 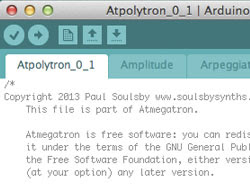 Version 0.1 of the Atpolytron software is now available. It provides 4-note paraphonic polyphony to the Atmegatron. There will be some major changes to the software when the final version is released, such as longer waveforms and a different audio processing chain.
Also in the pipeline are:

And there's more that are just at the 'idea' stage, so watch this space!

Here's a first look at the miniAtmegatron Arduino shield kit. It's at the prototype stage and is currently being debugged and tested.
The miniAtmegatron is designed for Arduino and electronics enthusiasts who want to build their own Atmegatron
It'll come with build instructions and also instructions on how to flash the Arduino to turn it into a USB MIDI device.
There are also plans to create a control interface with the Lemur iPad software.

Posted by Soulsby Synths at 09:50 No comments: